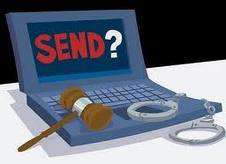 We know now that the consequences of cyberbullying, just like old fashioned bullying, are damaging and long lasting for the person being cyberbullyied, but what happens to the cyberbully-er?

Bullies have been around since the beginning of time, however it used to be limited to the reaches of human face to face contact. With the world opening up with electronic communications how it is possible to be bullied by someone you've never even met who lives across the planet.

What you can do

Most of the time when a parent discovers their child is cyberbullying they revoke their child´s internet networking privileges such as Facebook or IM accounts and may remove his/her computer privileges or confiscate his/her mobile telephone. Many parents often try to get their school involved in disciplinary action against the cyberbully, but, unfortunately, schools often avoid getting involved in off-campus matters. Some schools have been sued for exceeding their authority and violating the right to free speech. This is where many parents have their hands tied and lose the support they were hoping for the most.

Each cyberbullying incident is dealt with on a case by case basis and depends a lot on the parents as well as the school the child is attending.

A cyberbully may be charged with:

Check your local authorities to find out which acts are punishable by law. Unfortunately, most cyberbullying incidents never materialize into criminal charges, despite the efforts made by parents.

Back to top of Consequences of cyberbullying