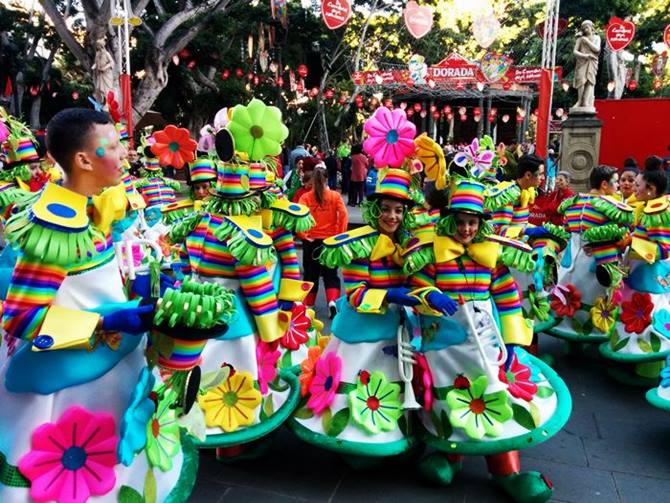 The Carnival San Pedro de Alcantara is one of my favorites. You get all of the fun and none of the hassle. If you have small kids or don't like huge crowds, then this is the carnival for you. The so-called "Carnaval de Marbella" includes fun and entertainment in four different areas of the city:  Marbella center, San Pedro de Alcantara, Nueva Andalucia and Las Chapas. The "Carnaval de Marbella" is celebrated every year and is a festive occasion for the entire family.

This is a time where everyone dresses up in costume and participates in a number of activities offered by the city. You may notice around this time of year costumes being sold in all the major supermarkets and smaller costume shops or flamenco stores.

Carnaval Season is here in Spain so it is a time for each city to celebrate. Below is the official schedule for this year's festivities in the town of San Pedro de Alcantara.

- Performance of the Local Carnival Groups.
- Paella tasting for all attendees.
- Inflatable castles, workshops and many surprises.

The Carnival Casitas will be located:

This little house is a stand where the little ones can make, together with specialized monitors, costumes with various stationery elements, as well as paper and rubber eva masks to fully enjoy all the events of our carnival.

Las Casitas de Carnaval will be located at:

This little house is a stand where the little ones can make, together with specialized monitors, costumes with various stationery elements, as well as paper and rubber eva masks to fully enjoy all the events of our carnival.

11.00 am - Children's Contest of Chirigotas in the Municipal Tent (former Fairground). Kids Party goes to the winning school.

The inscriptions will be made one hour before the start of the Fiesta in the Plaza de la Iglesia.

During the tour the jury will choose the best float and best costumes in individual category, couples and adult category groups.

The entries to the Adult Costumes Contest will be made one hour before the start of the Parade in C / Vega del Mar. Ages from 14 years.

To participate in the Carriage Contest, you must register, previously, through the Entry Registry.

Award ceremony in the Plaza de la Iglesia once the Parade is finished.

Then, awards ceremony in the Plaza de la Iglesia.

9.00 pm - Carnival San Pedro de Alcantara in the Plaza de la Istán, with the performance of the following groups:

And the Local Carnival Groups

The Tenure of Mayor of San Pedro Alcántara and the Municipal Delegation of Parties, reserves the right to suppress, modify or extend any of the events scheduled when the circumstances so require.

In the same way they are informed that, if for reasons or inclemencies meteorological, the accomplishment of the Carnival acts programmed in streets, squares, avenues or any other location in the open air in San Pedro Alcántara, they will be transferred by defect to the municipal tent installed in the old Fairground.

You may have also heard "El Entierro de la Sardina", in English the burial of the sardine. This tradition finds its origin in the symbolism of the beginning of lent, when you are supposed to leave behind (bury) all the excesses and sins of the Carnival period.

The big Shopping Malls always have costumes available. La cañada also has a costume shop on the top floor.Another option for costume hunting is the great Chinese Bazaar stores we have scattered throughout the Costa del Sol.

Malaga also have a great celebration around the same time as the Marbella Carnivals, these include magnificent parades, performances, competitions, drag queen shows and more.

The kids parade, which has a jury to choose the winners in the categories of costumes individual, family and groups. Leave the Santo Cristo Square and end with a children's party at the Paseo de la Alameda.

Marbella Town Theatre hosts semifinal of the musical contest groups and then the final. The kids comedy contest will also be held at the theater and will be awarded a with a children's party for the winning school.

The program also includes Humor Parade and Carnival Parade and at the Palacio de Congresos and a show with the participation of comedian "El Cherif" and Antonio Martin, two of the most famous from the Carnival of Cadiz. The entrance is €5 that will be donated to the association "Drawing Smiles".

Also the Carnavalesca Cultural Association elects the Momo God, which will be selected by Francisco Blanco Suárez "Butane" one of the best known figures of the Carnival of Marbella.

Last but not least a very well done to the winner of the Carnaval Poster.

Post a Carnival Event in Marbella or the Costa del Sol Right Here!

Do you know about a great upcoming Carnival Event that you'd like to share with families here?

Post it here and it will be shared with the entire International Family Community!

Check out all these great Carnival Events on the Costa del Sol!

Click on the links below to see details about the Carnival Events listed...